Playing with another guitar player can get messy if you’re both playing the same thing. Sometimes it’s ok. If not, then scale-tone triads are a nice tool for providing some variety.

I gave you some ideas in the last post. Here’s a bit more detail. This will mean more to you if you’ve done some experimenting  beforehand.

When you play notes in a chord individually as single notes, you have an arpeggio.

Here are the G major scale-tone triads as arpeggios.

Play through this a few times to get comfortable with it. Then move on to using it in a progression.

Now play any G major scale-tone triad arpeggio while the loop plays. Some will sound more dissonant than others. Find the ones that you like.

Keep the loop playing and go through the entire sequence of scale-tone arpeggios. Then try jumping randomly from arpeggio to arpeggio.

The more simple you are about what you play, the more it will sound like a part that you wrote for the song.

Now invent a few progressions using chords in the key of G major. Loop those and go through the process above. Try to pay attention to the sounds that you like and make note of them in your notebook. These will wind up making it into your songs as unique song parts. This is how you develop a personal voice. This is how you give yourself choice beyond playing the same thing as the other guy. 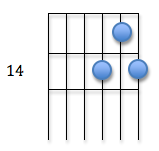 The next three posts are devoted to scale-tone triads. This post gives you the idea. The last two will apply it.

I’ve talked about building a chord on the first note of the scale in previous posts.

So what about building chords on the other notes of the scale? What chords are built on those?

Before I get to that, some review is in order.

And it looks like this on the staff. There are three Gs, 2 Bs and 1 D.

This can be reduced to this. There is one G, one B, and one D.

This is a scale-tone triad built on the first note of the G major scale (the G – 3rd fret, high E string). For each note of the scale, there is an individual triad. Some have this shape. Others have a different shape.

(At this point, you may be saying, “The open-string chord sounds a lot better. Why learn this other one?” Stick with me. It’ll be worth it).

To get the location of the triads built on the other notes of the scale, we need to know where those other notes are. To do this, we play the G major scale on the E string starting on the third fret. Here’s what that looks like.

Play that a few times to get to know where all the notes are. Do it using only your index finger. Imagine that each time you play one of those notes, you’re playing a triad.

In the next post, you’ll play the actual triads as a sequence from the first note of the scale to the last.

Take any four-note chord. Place it high on the neck, say around the 12th fret.

Here’s mine. This is a major 9 chord. The numbers under the diagram indicate which fingers to use. Add the open strings to give it a fuller sound.

Strum slowly through the chord, letting each note ring. Make sure that no strings buzz. Move the fingers toward the nut in this order:

If you use the open strings, you’ll move through some fairly dissonant chords. These will alternate with chords that sound pretty good. This allows you to get comfortable with dissonance, and to get experience playing with tension and resolution. This is a really important aspect of music in general.

Doing this allows you to find some new chords you might like, and you get to warm up your fingers in the process.

Don’t go any further than is comfortable. If you make it from the 12th fret to the 10th fret, and it starts to feel uncomfortable, stop. You could injure yourself. Do it every day and after a couple of weeks (maybe sooner) you’ll see a noticeable difference in your stretching ability.

Now invent your own four-note chords. Then use those chords as a stretching exercise like I did above. Invention works your creative muscles and gives you new resources for doing the exercise.

It might even give you ideas for new pieces.

How many ways can you use your fingers?

Question: What do your fingers do on the guitar?

Answer: Whatever you train them to do.

Which leads to this question: what are you training them to do?

These are broad categories. Thinking broadly allows you to open up your thinking. For instance, thinking “pattern” instead of “chord” can lead you to chord shapes you may not have considered. Thinking “chord” usually triggers your brain to do what you already know.

The first two things on the list – pressing and stretching – can be worked on in exercises. The last three things are involved in making stuff.

A lot of people ignore the exercises. Too bad, because they allow you do to more with the creative tools. They also keep your hands healthy.

How hard do you need to press on the strings? Most people don’t ask this question. They should because the harder you press, the harder it is to move the fingers.

Here’s a simple exercise that helps you discover the optimal amount of pressure you need to exert in order to make a sound on the guitar. It’s probably less than you think.

Resist the temptation to press harder. Most people discover that they’ve been pressing harder than they need. Pressing hard becomes habit and feels natural. It’s not natural.

With this lighter feeling in your hand, try playing a few chords or a scale. Concentrate on pressing only as hard as you need. As this begins to feel natural, your playing will feel better and you’ll have less chance of injury.

Don’t play a lot at first. It’s easy to fall back on old habits without realizing it. Keep your concentration and stay light.

Experiment by moving the shape to different strings (i.e. place the shape on the 1st and 2nd strings, the 2nd and 3rd strings, etc), and different frets. Same procedure as last post.

Now invent your own shapes. Just use two fingers for now. Try placing open strings between the fingers.

One note at a time

Some of these chords will sound dissonant and unusable if you strum them.  Strumming uses all the notes simultaneously. Try playing the notes in the chord one at a time.

Listen closely as each string is played. Stopping after you play the first 3 (or 2, or 4) notes might sound great. Don’t feel like you have to play all the notes in the chord to get what you want.

Don’t approach this as if you’re looking for a certain sound. Approach it as if you’re travelling in a foreign country without a map. Assume that you know nothing. Stop and listen. You might discover something you didn’t expect.

For instance, the first two notes might sound great as an alternating figure. You might skip over strings  (i.e. play from 1st string to 3rd string, or from 1st string to 4th string) and go back and forth between those. Instead of a chord, you get a repeating idea that might work great as a hook, or a background figure. You’ve gone from chords to hooks and background figures simply by not restricting yourself to the idea of “chord.”

Now do all of the above with three notes. Don’t get overwhelmed. Do it until you find one or two things that you like. Enjoy the process, and write down the stuff you think you’ll use. After a while, you’ll have a notebook full of ideas you like.