There’s nothing magic about it. All it takes is work and consistency. If you do the following every day (not every third day, not every other day. Every day), if you keep working even when you’re pretty sure that you won’t succeed, then success will be yours.

Not everyone wants it badly enough to do this.

This procedure works for a lot of people. It takes a lot of self-discipline and honesty. It’s common to convince yourself that the mistake you just made isn’t a big deal. If you want to do this right, every mistake needs to be counted.

This procedure is a lot more detailed. I use it with students who need to work on efficiency in their fretting and picking hands.

The point of this exercise is to train the fingers to move as efficiently, as independently, and in as relaxed a manner as possible. Keeping the fingers relaxed and as close to the strings as possible ensures maximum speed. They don’t need to travel as far, and they maintain stamina longer.

Place your fingers lightly on the sixth string at frets 5, 6, 7, 8. Don’t push the string down. Concentrate on relaxing.

Again, without moving any other fingers, move the middle finger to the fifth string in the same way you moved the index: efficient and relaxed.

Do the same with the ring finger and the pinky.

You won’t have gravity working for you on the way up. Pay attention to how different it feels. Stay as relaxed as possible, and go all the way to the sixth string. Be aware of the difference in how it feels at the top of the neck, as opposed to the bottom.

Now do the same exercise, but depress the string just enough to make a tone. Don’t press any harder than you need to. Very slowly press into the fretboard while plucking the string. Stop pressing as soon as you get a tone. People are often surprised at how little they actually need to press.

When you start on the way back up from the first to the sixth string, you’ll need to lift each finger off the string so you don’t mute the tone. The best (and most difficult) way to do this is as follows: starting with the pinky depressing the string and the other fingers resting lightly on the strings….

This exercise produces extreme finger independence and efficiency. It will drive you crazy at first. Be patient.

Throughout this exercise, try to eliminate tension as much as possible.

Alternate picking is arguably the most common and effective picking technique. It basically consists of moving down and up with the pick.

Hold the pick between the thumb and index finger as shown here. The pick is held on the edge of the index finger, not on the pad.

You can pick from the wrist or the arm. The wrist motion is the one you use when turning a key in a lock. The faster you play, the smaller the movement. At a certain point you will start moving the forearm up and down, using the elbow as a hinge.

Use the following exercise to start. As you can see, the whole thing is on the high E string.

Move from stroke to stroke slowly. Make the stroke, get the pick back on the string quickly, and rest there for a second. Then continue. Then gradually speed up using the metronome. At a certain point, you won’t be resting the pick on the string.

The point here is to eliminate extraneous pick movement, and getting to the next pick stroke as quickly as possible. This is fundamental to shredding.

Same idea, but go from the E string to the B string and back.

Getting from one string to another is where the majority of mistakes happen. This is because you need to make a larger movement with the pick than the one you make playing on one string. This inconsistency in distance initially confuses the picking hand.

And finally, the scale, circling back to beginning of this post. You can choose any scale, but I like to go with aeolian, otherwise known as the natural minor scale.

I like aeolian because you have to shift when you go from the fourth string to the third, and again from the third to the second.

And like all of the modes, one of the strings has only two notes. All of the others have three. This is a common asymmetry that you need to get used to.

And yes, you can learn three-note-per-string scales and eliminate this asymmetry. Do that too, but allow your hands the training that enables it to switch gears from string to string.

There are so many scales. Many are useful. But at some point you’ll want sounds that those scales can’t give you. What do you do?

Invent your own. You can do this by coming up with a simple algorithm. For scales you use an interval sequence.

Here’s how to make your own.

Simply make up an interval sequence.

Interval sequence: repeat maj2, min 3 until you return to the starting note.

Play around with that, and see if you like it.

Interval sequence: repeat min3, maj3 until you return to the starting note.

These are repeating scales. Some interval sequences produce non-repeating scales. This means that they don’t repeatedly return to the starting note after a certain number of notes like the scales we’ve seen here.

Try inventing scales using three intervals. Then make a few with four intervals. Or five. Whatever you want. The point is to generate melody that you can’t find in regular scales.

This is one of my favourite warmup exercises. It’s intended for the right hand given all the adjacent string movement. Use alternate picking throughout, and go as slow as you need to in order to eliminate any mistakes. Remember, your fingers will learn the wrong way to do something as easily as they will learn the right way. They’ll do whatever you tell them to do. GO SLOW! 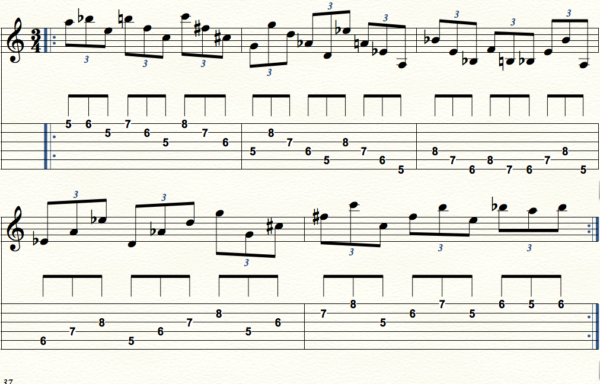 You can do this exercise with directional picking, too. This means that when you have consecutive notes on adjacent strings, you use the pick direction appropriate for the direction of the notes. So if the notes go from string 1 through string 2 to string 3, you use an up-stroke for each of those notes.

An exception to that rule is if you have to go from one string to a non-adjacent string. For example, the first note in bar 2 (G) is an downstroke even though it’s part of a 4-note sequence moving in the same direction. An up-stroke at that point is inefficient since the next note is on the B string. Try that move with consecutive up-strokes if you want to see what I mean. 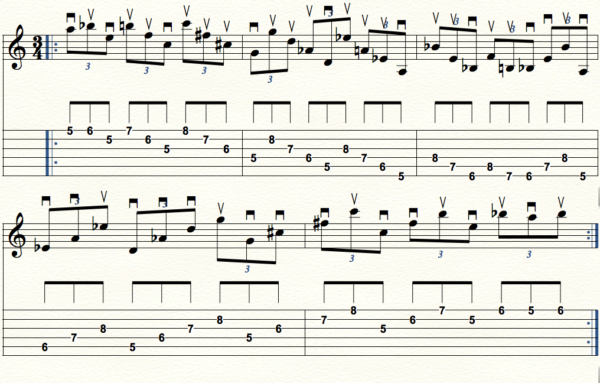