You know the notes in D dorian on the B string from the last post. Here they are on the G string, starting at the 4th fret:

Play around with these like you did in the last post (playing the frets in sequence, making chords, etc).

Strum all six strings while fretting notes on the G string and the B string together. There are a few basic ways to do this.

There are lots of combinations here. Do some exploring. 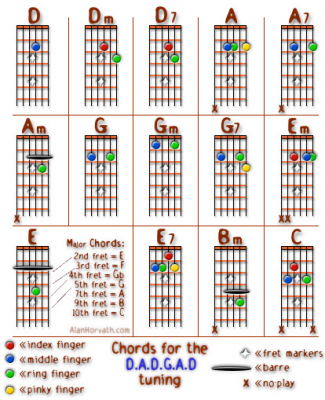 Here are some examples of how to mix minor pentatonic and dorian.

I’ve used eighth notes to make the difference between minor pentatonic and dorian easier to see. 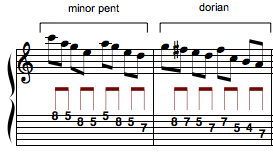 Use the same lick and vary it rhythmically.

Long notes are always effective. They act as milestones for listeners simply because they last longer than the notes around them. Notice that I removed a note from the original. It wasn’t working with the rhythm I was using.

A bunch of notes for the blues 2

Here’s the A dorian mode. Use it on the blues in A.

Here’s the backing track from the last post again.

Play the A dorian scale against it. Once again, get comfortable with the scale, and write down stuff you like as you play it.

Notice that all of the notes of the A minor pentatonic scale are in the A dorian mode. Knowing that, you can easily move between the different moods represented by each of these scales.

Here’s the blues scale in A.

Play it against the backing track.

Each of the four scales I’ve been talking about in the last two posts offers a completely different melodic world. Play the backing track and play each scale, one after the other. As you move from one scale to the other, notice how the mood changes. Does this offer any ideas for composition or song-writing? Are you able to sing along with any of the things you play?

If you can sing along with them, do they inspire any lyrics? 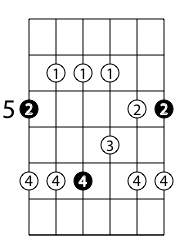