Moving from ionian to dorian 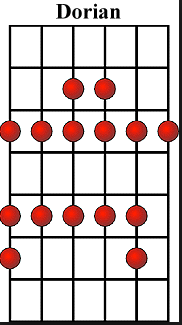 Here are the arpeggios in the B dorian mode starting on the 6th string, 7th fret. This is a bit of a finger exercise. Take it slow.

And here are the A ionian arpeggios from the last post.

Here’s what that looks like. I’ve added a continuation of the dorian mode.

The next thing to do is work on moving from A ionian to B dorian, starting on every arpeggio in A ionian. You can also start from any arpeggio in B dorian, and move to A ionian.

You’ll have noticed, from playing the arpeggios in the last post, that each arpeggio type – major, minor and diminished – have their own shapes.

If you play them in the same position – as opposed to along the neck – things change.

Let’s take the arpeggios in the key of A, fifth position. This means we’re using the A major scale, or A ionian. Same thing.

As you play this you’ll notice different shapes for the same chord quality. Major and minor triads each have two shapes, even though both shapes start on the root. This makes playing arpeggios in position a bit more difficult, but it makes it easier to use when soloing.

Both ways are useful, and – good news – they’re complementary.

Once you know your arpeggios in other modes, you can move between them using arpeggios.

In the next post, I’ll show you the arpeggios in the dorian mode. Then we’ll start moving between ionian and dorian. 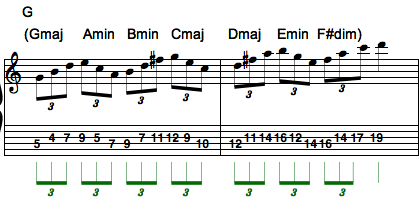 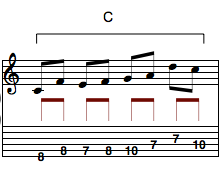