What’s functional harmony, you ask? Essentially, it describes rules determining how chords are related in a progression. In other words, chords tend to go to some chords, but not others. Over time, this creates predictable chord patterns.

Function, then, describes where the chords in any key tend to go.

Here’s a chart outlining all of the tendencies/functions in the key of C.

Other possibilities not on the chart:

So this is a formula for writing music. See what happens if you just plug in chords using this formula. Write some progressions down without playing them. Then play them and see what you think.

You may find that some of the songs you’ve written in the past don’t follow these rules completely or at all. If that’s the case, then you’re dealing, in whole or in part, with non-functional harmony. This doesn’t imply some sort of deficiency. It’s simply another way of hearing things.

In the next number of posts, I’ll be talking about the characteristics of both functional and non-functional harmony. I’ll look at what makes chord progressions predictable, and how to use that knowledge to go beyond standard ideas.

It’s an effective move for the guitar player to become the bass player. Even if you never actually play a bass line, it’s a good idea to learn how to construct one.

Let’s take a basic progression and see what we can do with it. We need the notes before we can sink into groove.

Arpeggios are simply the notes in a chord played one at a time instead of together. These are the main notes that any bass player in any style will play. But outside of walking bass, no bass player will play them in the way I’ve outlined above. There needs to be some rhythmic interest.

Before we get to rhythm, though, let’s see how arpeggios are built. It’s not all that complicated.

Let’s start with the key of C.

How to make an arpeggio

How do I know that building an arpeggio from the D is a minor arpeggio?

Here’s how it works in any major key (I’ll use C major as examples here):

To be totally clear:

Now you know how to find the main notes for making a bass line. Take a song that you like to play, and find the arpeggio notes on the E, A, and D strings.

Graphic scores provide a way communicating musical ideas. Composers have used them for decades when they don’t get what they want from traditional means. Some of them can be appreciated simply for how they look.

Here are a couple of examples… 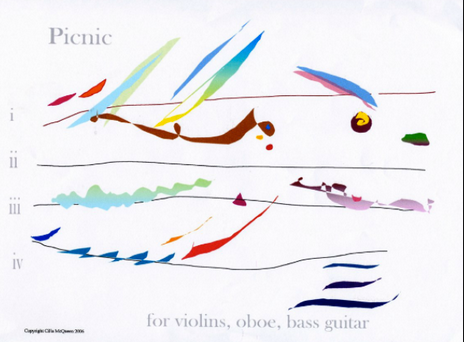 How can this kind of thing be used in songwriting? Good question.

If you put your music on paper, it can be a great way of communicating chaos, noise, a departure from normalcy, etc. You can write a normal chord progression, follow it with some kind of abstract image, and then go back to the chord progression. And yes, you can just explain this kind of thing to your band, but it helps to work out ideas in this way before you start talking about it.

If you’re blocked, no ideas (or worse nothing but old ideas), it can help to draw pictures. Get away from the way that you’re used to working. Try paint, clay, whatever.

Can you make a picture of the song you want to write? What do the verses look like? The choruses? The bridge?

Get six pieces of paper, and make some pictures. As a way of keeping your thought process open, make them abstract. No people, animals, houses, etc.

Now group them into verses, choruses, and a bridge. Three of the pieces of paper are verses, two are choruses, and one is a bridge. The different colours simply communicate that each verse and each chorus is different from the others in some way (I’m using colors for the sake of expediency. I use pictures to go deeper). 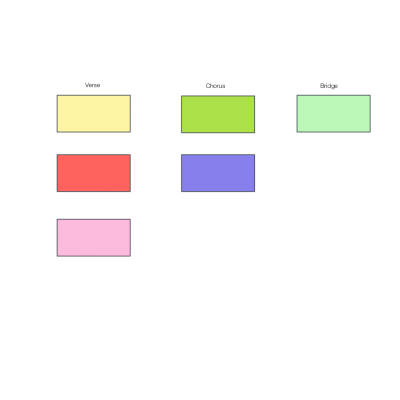 Now move the pieces of paper into a song form. Here’s a standard, alternating section example: 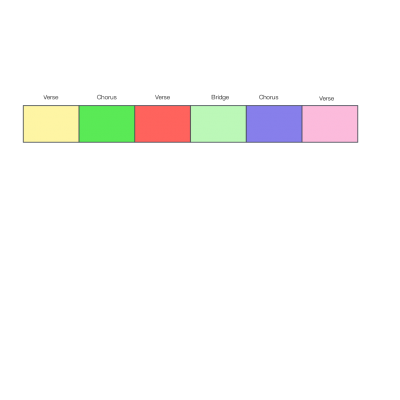 You can move the papers in any order you want. What would it mean if the bridge was the first section? How about one chorus and six verses. Maybe four choruses and 2 verses. Two bridges?

Or you can get rid of the labels and just let the images flow into each other. This may feel like a stretch. But it’s not necessary to use what you produce in this process. It’s an exercise to stretch your brain. And who knows? You might find some sounds you really like…

This is my 100th post. Which seems a bit incredible. My other 4 blogs produced maybe 20 posts altogether…

Up until now, this blog has been about helping guitar players work with concepts that might make their songwriting/composition process and product more interesting. That won’t change.

But after 100 posts you start to want to stretch a bit. It will always about making stuff, but I’ll start introducing topics that I notice I’ve been shying away from: more advanced compositional ideas, some tech stuff, jazz harmony, artist reviews from time to time. Other stuff…

But there are things you can do to make your playing feel relaxed. As you might expect, it takes some practice.

Your motor cortex doesn’t think in terms of slow and fast or good and bad. It just records movements needed to complete an action. If you do something too fast and make mistakes, it thinks that that’s correct. Then it keeps doing that until you tell it to do it a better way.

Bring intention to your practice. Be aware of your mental states. If you’re playing something that you find difficult, be aware of thoughts like, “Oh, oh, this part’s hard.” Or “I should be playing this faster.” Or, “I wish I could play it like that guy.” These kinds of thoughts create tension.

Thoughts like, “smooth”, “easy”, “light” communicate a feeling of relaxation. Try placing those kinds of thoughts in your head as you practice.

You can program you brain and body to function fluently using a metronome. Set it to a comfortable speed. Too slow or too fast won’t work. Most musicians tend to think of slow as easy, and sometimes it is. But sometimes it feels unnatural and we struggle to make our muscles conform to the slowness.

Everybody has a speed where things feel loose and natural. Strum a simple chord progression and adjust the metronome until you find that speed. It might take a while but it’s worth the time.

If this optimally comfortable tempo is slower than a song you’re learning, bring the tempo on the metronome up a notch. By notch I mean no more than five. So if the metronome is set at 70, don’t go higher than 75. Accept that you may have to go lower than that. Once you’re comfortable at the new tempo, notch it up again. Continue until you’re playing the speed of the song.

Pay close attention to what your body is telling you. If there’s any tension at all go back a couple of notches. Seriously. If you go too fast and program mistakes into the brain, it will take 6 – 10 repetitions of doing it right to get it to where you want. Going slow and being patient will get you where you want to go faster.

This isn’t easy to do. Most people get impatient and try to go fast too soon. Be patient and honest with yourself, and eventually you’ll be able to play anything you want.