Parts of the guitar

All guitars (acoustic, electric, classical,  etc.), have things in common. The diagram above illustrates the various parts of a guitar. I love that the first three are modelled on the human body.

At the top of the guitar is the “headstock”, the part of the guitar attached to the neck of the instrument. On the headstock are “tuners”, used to adjust the pitch  of the strings.

The neck of the guitar where you put your fingers in order to create different notes.

The neck of a guitar includes the guitar’s frets, fretboard, tuners, headstock, and truss rod. The wood used to make the fretboard will usually differ from the wood in the rest of the neck.

Marker dots on the face of the fretboard are usually placed at frets 3, 5, 7, 9, 12 (double dot to indicate the octave), 15, 17, 19, 21, 24 (double dot to indicate the second octave). There are often marker dots on the side of the neck as well where the player can easily see which fret they’re on. Classical guitars almost never feature position markers, especially on the fretboard’s face, whereas electric guitars usually do.

The neck of the guitar adjoins the “body” of the instrument. Most acoustic and classical guitars have a hollow body with a “sound hole”, which projects the sound of the guitar. Most electric guitars have a solid body, and thus will not have a sound hole. Electric guitars will instead have “pick-ups” where the soundhole is located. These “pick-ups” are essentially small microphones, which allow the capture the sound of the ringing strings, allowing them to be amplified.

A bridge is a device that supports the strings, and transmits the string vibrations to the soundboard (the top of a guitar) which transfers the sound to a listener’s ears.

The nut is a small piece of material (plastic, bone, etc.) found at the point where the headstock meets the neck of the guitar. Small grooves are carved out to guide the strings up to the tuners.

When nuts are worn out or poorly constructed, problems such as string buzz, fretting out and tuning performance are just a matter of time.

The strings of the guitar run from the tuning pegs, over the nut, down the neck, over the body, over the sound hole (or pick-ups), and are anchored at a piece of hardware attached to the body of the guitar, called a “bridge”. They are the vibrating elements that produce sound on the guitar

Strings may consist of a single material, like steel, nylon, or gut, or they may be  “wound”, having a “core” of one material, with an overwinding of other materials.

Tuners, or tuning pegs (found on the head) do two things: they hold the string on the guitar, and they change the pitch produced when the string is played.

Tablature (or tabs) uses the image of a guitar neck to identify note locations on the neck of the guitar. The following example shows the letter-names of the notes above a five-line staff at the top, with the tablature below.

Notice that tablature uses six lines, each of which represents a string on the guitar. The highest line is the first/smallest string; the lowest line is the sixth/largest string. The numbers on the lines tell you where to put your fingers. 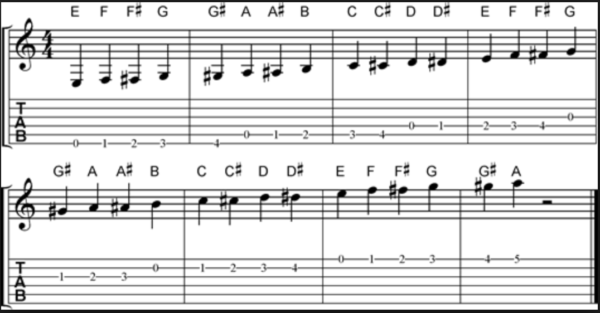 For example, the number 1 in the first bar tells you to put your finger on the first fret of the sixth string. 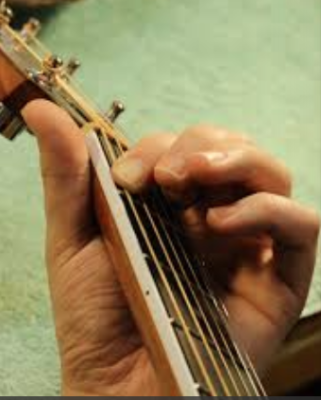 You Belong With Me