My approach to creating ambient music involves the following resources:

Check out my post on prepared guitar for an explanation.

Guitar Rig 5 and prepared guitar describes my basic rig. I also use…

This provides me with tremendous resources for creating non-conventional guitar sounds. I combine these sounds with the Boss Loopstation to make soundscapes of orchestral complexity.

I set this up by placing one instrumental section on one of three phrases. “Phrases” are what the Loopstation calls the place where you can record and overdub sounds. You can see them on the lower right of the device.

I’m thinking conceptually here. I don’t use conventional orchestral instruments (although lately I’ve been thinking about it). I create 4 -6 unique sounds for each phrase using the above resources. Then I arrange and overdub them.

Each sound can be either a prepared guitar sound processed through Guitar Rig or MAX, or sounds created in Audiomulch, Samplr, or Curtis. Then I can fade sections in and out as desired while playing a live part against them.

There’s a lot of detail to talk about. In future posts I’ll describe the materials I’ve mentioned here in some detail.

I’ve taken to calling my electronic work “fractured ambient.” I like the phrase, but right now that’s all it is. A phrase.

And I’m deciding whether or not it really works. Looking at history usually helps sort things out.

A (very small) bit of history, plus a definition

Erik Satie is often invoked as the originator of ambient music. Listen to Music D’ameublement, though, and you’ll wonder why. But then listen to the Gymnopedies and it’s pretty obvious. This is serious chill.

Brian Eno coined the term “ambient”. Eno’s concept of ambience is music that can be either actively listened to or used as background, depending on whether the listener chooses to pay attention or not. It’s been a highly influential if not entirely original idea, at best informing the resurgence of electronic ambient via the dance world, at worst being taken to its passive extreme by many creators of “relaxation” music.

If you want a straight up definition, here’s Wikipedia: “…a genre of music that puts an emphasis on tone and atmosphere over traditional musical structure or rhythm. Ambient music is said to evoke an “atmospheric”, “visual”[2] or “unobtrusive” quality.”

Here’s how Joshua Rothman in his New Yorker article “The Discreet Charm of Ambient Music” describes the experience of listening to Eno’s “Lux.”

… you’re equally aware of the way that it frames the other sounds you’re hearing and making: the traffic in the street, your own breathing, the keys on the keyboard, the creaks in the floorboards, the rustle of your clothes when you move. You’re also more in touch with the small inflections in your own moods. Each key change, and each new instrument, with its new timbre, is an opportunity to measure the difference between the feeling of the music and your state of mind. “Lux” is fascinating as music. But it also makes the world more fascinating. It’s a catalyst for consciousness and self-awareness.

Fractured ambience subverts this to some extent by introducing noise, environmental sound, and spoken word. So is it still ambient in any conventional sense? Is it – as Wikipedia says – atmospheric, visual, unobtrusive?

It’s definitely atmospheric and visual. Unobtrusive? I’m not so sure.

More than a lot of ambient music, it pulls you towards it (resulting in a less meditative, take-it-or-leave-it type of experience). But it still immerses you in a sonic texture that, as Rothman says, makes you aware of the way that it frames the other sounds you’re hearing.

In my next posts, I’ll look at artists who I think are taking a fractured approach.

Because it’s too hard.

First they need to figure out what’s technically possible.

Then there’s dealing with different effects units and different brands of effects.

Luciano Berio’s Sequenza XI for classical guitar is an example of technical difficulty. When he wrote the piece, Berio consulted Elliot Fisk to see what’s possible on the guitar.

Hand size isn’t a consideration when writing for most instruments. Because of this, composers often forget to consider it when they write for guitar.

If a composer decides to write for effects, which ones does she use? Delay is the easiest. You can specify what you want and it will reproducible on any delay unit.

Distortion is another story. Is it distortion you’re looking for or overdrive? Amplifier overdrive or stomp-box overdrive? If it’s distortion, then what kind of tone? How much distortion?

Reverb is tricky, as well. The composer has to be specific; some players like lots, some like a little. If you just put “reverb” on the score, you really don’t know what you’ll get. This goes for most effects.

You have to sit down with the player, and go through their effects in detail. But then you’ll only get that player’s range of effects.

Even saying “clean tone” is a problem. Clean with a Fender Telecaster is different than clean with a Gibson SG.

Same with amps. Every one sounds a little different. What you’re hearing in your head isn’t what you’ll get from every player.

So, you can try to nail down the sound you want from the electric guitar. But since each player’s sound is defined by a different guitar/amp/effects setup, you’ll only get what you imagined from the player you consulted.

For a lot of composers, this is a serious problem. They want to communicate accurately what’s going on in their ears, and they want the piece to sound the same regardless of who plays it.

We tend to think about rhythm in terms of number. I’m thinking specifically of the way we break up beats – 1/8 note, 1/16 note, etc.. This can be useful when organizing material.

Think about music is as an unbroken, continuous sound. Then take this sound and break it into pieces in an organized way by imposing a repetitive number sequence on it.

A string of eighths notes can be thought of as our continuous sound.

Using the number two in a specific way – by placing a rest after every second eighth note – produces this:

Alternating two and three gets this:

Right away you can see how complex this can get. You can alternate any sequence of whole numbers or fractions. Of course the longer the sequence gets, the more difficult it becomes to remember it. This reduces clarity.

You can use this technique with alternating rhythmic values – eighth notes, sixteenths, triplets – and get much richer rhythmic profile. Here I’ve used the number pattern 2-4-1-3 (two eighths (rest), four sixteenths (rest), one triplet (rest), three eighths). Place a rest after the last eighth note, and then repeat the sequence.

It’s not really four sixteenths, as you can see, but it sounds like that. The point is to take an unbroken stream of notes of similar or varying values and break it up in a coherent way.

So you can use a sequence of randomly changing rhythmic values, and place order on it by using a repeating number pattern.

Experiment with the length of your patterns. Longer patterns work best when the rhythmic values aren’t changing much. Shorter patterns are good with rapidly changing values.

The idea, as always, is to find a balance between clarity and complexity.

In the last post, I talked about a piano duo I’m writing. I focussed on melody in that post, but I’m going to talk about accent here.

When you accent a note, you make it pop out of the texture. Regardless of what else is going on, that note becomes the thing that everyone pays attention to for the moment that it exists.

So there needs to be a good reason to accent notes.

A couple of common places to accent a note is at the beginning or the end of a phrase. Another is on the highest note of a phrase.

Another reason (and the way it’s used in this piano duo) is to create an accent pattern. In this piece there are four accent patterns, one for each of the four hands.

I use four-note chords for each of the four hands in the piece; I’m simplifying the idea here by using single notes.

That’s the algorithm.The choice of 10 for pattern 1 is arbitrary. The other patterns get larger by 3 each time.

Here it is in score format. 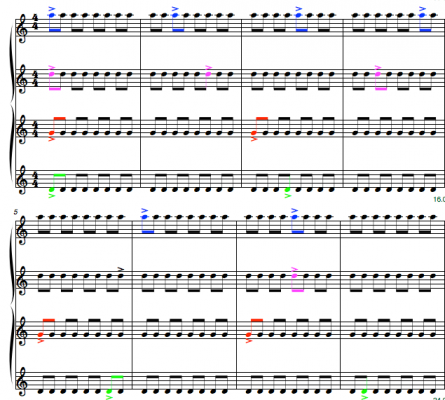 And here’s a version of only the accented notes for maximum clarity in terms of what the composite pattern is.

Combine this idea with the melodic aspect discussed in the last post, and you can see the structure start to deepen.

We’ve used melody and accent. What other parameters can you create patterns for?

I did a Mile Zero Dance show called Sho-tel a while ago. Mile Zero does a lot of really interesting things in this city, bringing together dancers, musicians, visual artists, filmmakers, archivists, folklorists.

The show I did happened at a motel in the west end, seedy and gradually falling apart.

By noise I mean that I played with timbre. I didn’t worry about melody, chords, or playing in any conventional way. In other words, I concentrated on the sound character of the instrument. Check my soundcloud page under experimental guitar if you want to hear examples.

Timbre and the electric guitar is an insane topic. There’s just so much you can do.

Each effect has a range of intensity, so you can get a variety of timbre out of just one of them. When you start combining them…

You can also get interesting sounds out of your guitar without effects.

All of this applies nicely to abstract or avante-garde music. But how do you use it to write songs?

Try re-conceptualizing the guitar as a different instrument. Make it a percussion instrument by weaving some felt through the strings and tapping the strings with a chopstick. Can you hear this in an intro, or as a coloristic device in the chorus?

When you use timbre this way, it’s a good idea to start simple. Don’t overplay. Play the sound once and let it ring (if it’s a sustained sound). If it’s different than the sounds around it, it will draw focus. Think of it as highlighting important events – beginnings of verses, choruses, etc.

If it’s a percussive sound, you could use it in place of the drums, or as part of the drum sound.

These are suggestions for where to start. As you work with this, ideas will occur to you. Follow them.

Experiment by making sounds that don’t normally fit in the stuff you normally write.