Placement of notes is crucial for producing metric tension. Generally, the production of metric tension means notes not lining up with the pulse.  Repeat the following example, and the notes in the top stave will line up with the downbeat of every bar, and nowhere else. 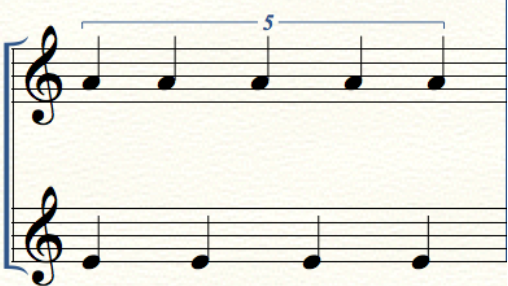 Does the next example hold more tension or less? Conventional thinking says that more notes equals more tension, at least in terms of rhythm. However, to my ear (at least in this case), less notes makes it  less predictable. Because of this, it holds more tension.

For someone else, it may hold less tension, especially if they’re hearing a composite rhythm instead of a metric relationship.

The measurement of rhythmic tension relies a great deal on number of notes. The measurement of metric tension looks at the relationship between pulse and the notes played against the pulse. Your experience of tension arises from how you are listening.

These examples highlight the idea of defining different qualities of tension, instead of defining tension based on quantity of material. Quality is almost completely subjective, however.

So how do we define rhythmic quality? 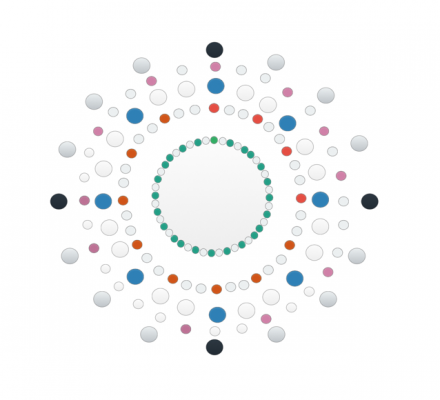 …informs much of my research. It’s pretty, but what does it mean?

Essentially, it’s a template for visualizing metric and rhythmic tension. The outer circle shows four bars of the pulse in 4/4; each black dot is the ‘1’.

Moving towards the centre, the next circle represents the South Indian karnatic system (konokol) in 1/16 notes; each coloured circle indicates an accented note. More on the karnatic system in later posts.

The inner circle is a Turkish usul. Usuller (plural for usul), are rhythmic modes in Turkish makam music. The one that I’m using here is in 11/8. There are two ways to use this usul: as 11 against 4 (as used here) or as 1/8 notes against the primary pulse.

Each circle, then, holds a specific rhythmic personality. Different personalities can be inserted by using different konokol patterns, different usurer, etc. I leave it to your imagination to find these personalities.

… bring up and interesting perceptual dilemma. Namely, that they can be perceived as three simultaneous tempo levels.

The notes marked forte can be perceived as downbeats, the piano notes as upbeats; this creates a half-speed tempo. While it’s less intuitive, the piano marking can also be perceived as the downbeat, with the forte sounding like a strong anticipation.

Both things occur simultaneously, much like the common image of the wineglass and/or two faces. 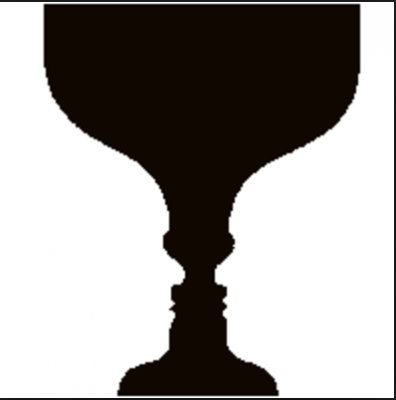 That gives us two half-speed tempos, along with the original  tempo. Three in one!

The ambiguity here creates a really interesting kind of tension as we flip between three different experiences.

Hermit Crab is the band that I’m writing for and playing in. It’s there that I’m working on addressing issues of rhythm and meter. Here’s a snippet of something that I’ve written for the band:

Notation, in this example, communicates a certain quality of tension. Imagine in your minds ear, the absence of quarter note triplets in the drums. Or the absence of the same in guitar 2. Rhythmic agreement between instruments disappears, and rhythmic tension changes.

Dynamics are also effective in altering tension quality. Rhythms that create different tempos – the guitars in this example – can be given a different tension profile using varying dynamics.

Dynamics are also effective in altering tension quality. Rhythms that create different tempos – the guitars in this example – can be given a different tension profile using varying dynamics. The following example uses fairly extreme contrast in order to make the point. It can be a lot more subtle. It can also be a lot more complex.

Can we imply different simultaneous meters in a single-line rhythm, or do we need multiple rhythmic streams?

The second bar in the following example can be experienced as 3/16 or as 4/4 with accents every three sixteenth notes. Since the first bar strongly establishes 4/4, most people hear the second bar as accents in 4/4 unless they make the decision to shift their perception to 3/16 before hearing it.

Hearing both 4/4 and 3/16 simultaneously would most likely not occur unless the passage were written differently. In two parts, for example:

To hear both meters simultaneously, each part would need to be as independent as possible. This can be done by defining different timbre, register, dynamics, etc. for each part. The less that you define these things, the more you get this:

A single composite rhythm, which generates no ambiguity, and a lot less tension than the communication of separate, simultaneous meters described above.

But if we do imply different meters in a single line, how does this affect tension when we add more lines? Clearly, more tension is generated simply by adding more notes. But I’m interested in quality of tension, not quantity.

This question of “how” interests me more than “how much”. How can the same level of tension in different situations have different qualities?  Are those qualities determined solely by the relationship between meter and rhythm? Or are they determined by factors beyond meter and rhythm, like timbre, register, etc?

There’s a lot to explore here.

There are three basic types of tension expressed in the relation between rhythm and meter: syncopation, polyrhythm, and groove.

Syncopation challenges our perception of meter. In other words, meter tells us where things are most likely to occur; syncopation subverts those expectations.

Generally, we expect rhythmic emphasis to occur on the downbeat (otherwise known as strong beats), as opposed to upbeats, or weak beats.

We can syncopate this by simply removing beat 3. This emphasizes the weak part of the 2nd beat.

This example is more syncopated; all weak beats are emphasized, resulting in more tension.

There’s a lot more to say about syncopation, but I’ll save that for a later post. For now, let’s move on to polyrhythm.

Sometimes meter is only weakly expressed; sometimes it’s not expressed at all. The rhythm in question may simply not communicate a meter, in which case the musicians rely on the listener to be able to predict the metrical framework.

Is this in 3/4 or 4/4? Depending on how you listen, it can be one or the other. The ambiguity created by this phenomenon can create a lot of tension; and adding more layers with different meters adds more tension.

and is then shifted to start in a different location.

This causes new relationships between layers. They interlock in new ways, and create different levels of complexity.

and then the first rhythm superimposed on the displaced rhythm.

Again, there’s lots more to say, but that will come later.

Groove can be as simple as a drum kit repeating a 2-bar pattern, or the complex interplay of a rhythm section. It involves some degree of syncopation, along with cross-rhythm and metric displacement; it is continuously repeated, and it makes you want to move.

In the context of continuous repetition, then, the violation of expectation (tension) found in syncopation and polyrhythm become pleasurable. This is good news, but makes me wonder how long a rhythmic unit can be repeated before it’s no longer pleasurable. In other words, when does it become boring?