Let’s take the C major 7th chord I talked about in the last post. 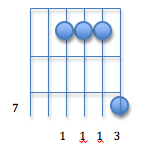 …start moving the notes around.

In some cases when you do this, you get other functional chords (rather than ambiguous ones).

For example, move the 7th of the chord (the note on the E string) down a semitone and you get a C dominant 7 chord.

Move it another semitone down and you get an A minor 7 chord. Suddenly, we’ve changed roots from C to A.

Now, using the A minor 7 chord, move the note on the G string up a semi-tone and you get an A dominant 7.

Move that same note up another semitone and you get an Asus4 chord.

So the work is to simply move your fingers one or two frets up or down on each string, just like you did with triads. The difference is that with 7th chords, you get more material.