Here’s one of the preparations that I use to get unconventional sounds from the guitar. 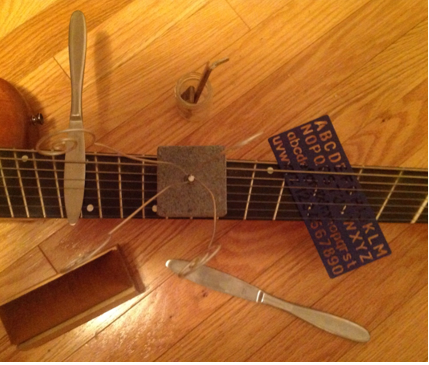 Guitar preparation allows me to create sound that doesn’t suggest the sound of the guitar. Eliminating the associations that the guitar brings to mind allows listeners to experience the sound itself.

The plastic stencil muffles the sound to a certain extent when the strings are activated; the knife produces a sustained ringing sound when struck with wood or metal; the stone cube with the metal stems muffles the sound, but in a different way than the stencil. It can also be used to scrape the strings.

The great thing about digital effects software (I’m using Guitar Rig 5) is that you can experiment with effects by “piling on.” This means using multiple iterations of the same effect just to see what happens.

Here’s one of my favourites.

Resochord is a pitch modifier and harmonizer. It uses single pitches or chords and can pitch shift them and sustain them. Stacking a number of them like this creates a preset with a ton of harmonic possibilities. I’ve added a pitch pedal for more control, and a fuzz pedal when I want a grittier sound.

With the recipe of preparations and effects preset that I’ve outlined here, I’m able to produce the following sounds:

This reminds me of an animal sound (a roar of some kind?) slowed down. It’s difficult to hear it as a guitar sound.

A bell-like sound with something that sounds like a distorted organ.

Similiar to the knife strike, but with a different attack sound.

In this example, you can clearly hear the guitar.

These are examples of what can be done with one preset and guitar preparations. Preset creation is not limitless, but it’s extremely extensive. Mixed with the huge variety of guitar preparations, the guitar becomes an instrument capable of tremendous sonic possibility.

And it can be used this way for songwriting. More on that in the next post…