How to write chord progressions a pro would love, Part 13: Order of flats

Here’s the acronym for the order of flats. Battle Ends And Down Goes Charles Father.

Notice that it’s the acronym for the order of sharps backwards. 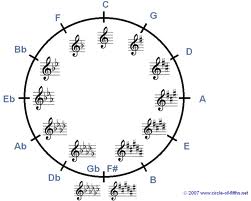 If you go counterclockwise around the circle and you get the flat keys – F, Bb, Eb, Ab, Db, Gb, and Cb.

Note that Db can also be C#, Gb can be F#, and Cb can be B. Please don’t worry about this right now. If I ever talk about songs in the key of C# or Db, I’ll explain then. It’s not that complicated, but it would be a distraction right now.
What we need to focus on now is the order of flats. This will allow you to write chord progressions in flat keys.
Here’s the order of flats on the staff…

…and here it is expanded.

‹ How to make chord progressions a pro would love, Part 14: Rhythm

How to write chord progressions a pro would love, Part 12: Interlude ›